Between Christmas and New Year, I took a rush trip down to Tanzania to visit a Tanzanian friend I had met in Melbourne earlier in the year.  He was back in his home town of Morogoro with his family, and so I took the opportunity to meet his family and explore the Morogoro region a bit.

I have driven through Morogoro several times on our tours travelling between Kenya and South Africa, but have never stopped.  To be very honest, Morogoro is a typical African town – nothing to get very excited about.  But about an hour south east of Morogoro lies Mikumi National Park.  The main highway from Dar Es Salaam to Malawi traverses right through Mikumi, but again I have never had the opportunity to explore the park beyond the highway.  It is possible to see giraffe, elephants and impala as you drive along the highway, which really reminds you that you are in Africa.  Imagine just driving along the highway and seeing a family of elephants under the trees on the side of the road!  Or a giraffe waits patiently to cross the road as you go past.  So I have always enjoyed that drive, but now it was time for me to venture off the highway and see what lay beyond.

From the highway, it looks like Mikumi should be a forested park, as thick shrubs and trees line the road.  But on the other side of this line of vegetation, the landscape opens out into the typical African savannah.  We were travelling in Segere’s vehicle, which was just a saloon car, and the roads were perfectly fine for 2 wheel drive.  At the gate we were able to hire a guide who knew his park inside out and could tell us about the animals we were seeing. 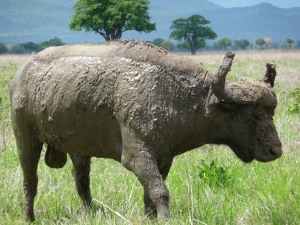 The first wildlife encounter was a small herd of buffalo covered in mud.  They wallow in the mud to cool down, which was understandable because it was baking!  I always think buffalos look a bit dim, especially with their horns creating an image of a ridiculously overdone coif.  But these ones covered from top to toe in mud really looked silly… not that I would dare tell them that, they didn’t look so friendly!

Next we saw a couple of elephants.  Segere’s kids were very impressed with how big these giants were!  They were chilling out under a tree, one of them scratching his hind leg on the trunk.  The tree looked ready to fall under the weight.  Elephants are responsible for huge amounts of environmental destruction as they eat so much and also knock plants down as they travel, scratch and source food.  Seeing an area after a herd of elephants has been through makes you wonder if some devasting machine came through and wreaked such havoc.

Giraffes were the third item on the list and we saw a lot throughout the day.  I can never decide if a giraffe looks graceful or clumsy when it runs, but I like to see them run however they look.  Most of the giraffes we say were under acacia trees, which is their favourite food.  The acacia has huge thorns however, and tiny leaves so I would like to question the giraffe on the risk versus reward of their menu choice.

We saw zebras, impalas, and plenty of birds including lilac-breasted roller, blacksmith plover and oxpecker.  We got to the hippo pool just in time for the only rain of the day.  It’s the only place in the park where you can get out of your vehicle.  Fortunately the rain didn’t last long and we were able to get some family photos to remember our wonderful adventure. 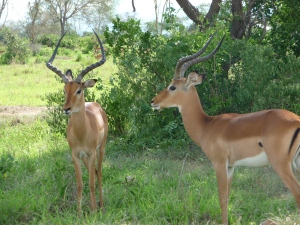 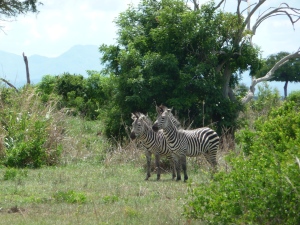 Thank you to Segere and Speciosa and their children Nathan and Naty for hosting me in Morogoro and showing me Mikumi National Park!

A philanthropic tour operator, creating positive experiences both for travellers and the local communities we interact with. We provide quality tailor-made tours that visit the sight-seeing highlights as well as community-based organisations.
View all posts by overlandtraveladventures »
← Silverplate School
Kakamega Forest →