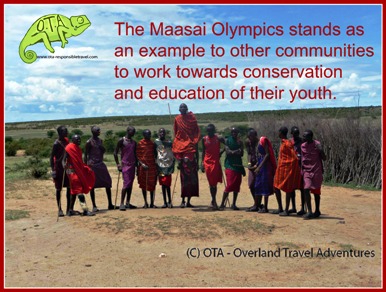 The Maasai Olympics is a biennial event in Kenya that started in 2012. 2014 saw the second Olympics and we are very excited for the next one this year. So in the lead up to the next event, we have a look at what it is all about.

Big Life Foundation and Lion Guardians work closely with the Maasai communities in the region surrounding Amboseli and Tsavo National Parks in southern Kenya to hold this event. The Maasai traditional initiation rite was to hunt and kill a lion. But a few years ago, in 2008, the elders of the area recognised the practice as unsustainable and approached Big Life Foundation to assist in setting up a different way to prove the manhood of the Maasai. And so the Maasai Olympics were born, to educate the communities and gain their committment to conserving wildlife and habitat for the future and to recognise that this is their only sustainable way of life.

The Olympics consists of five events: rungu throwing, spear throwing, high jump, 200-metre sprint and five-kilometre run. A rungu is a club that most Maasai men carry (you often see it tucked into their belt) and the throwing competition tests accuracy while the spear-throwing competition tests distance. The high jump is not the standard high jump we think of in the west. The Maasai traditional dance involves a lot of jumping where the men simply stand on the spot and jump as high as they can, staying as rigid as a pole. Trophies, cash and even a prize bull are up for grabs for the winners. The two winners of the five-kilometre run in 2014 even received a sponsored trip to the 2015 New York Marathon!

Changing the tide to conserve lions (and other animals) is vital for the survival of Kenya’s delicate eco-system. The initiative taken by the Maasai elders a few years ago is admirable and the Maasai Olympics stands as an example to other communities to work towards conservation and education of their youth. More information can be found on Big Life Foundation’s website.

The Maasai Olympics takes place every two years in December usually somewhere in the Amboseli-Tsavo eco-system. If you would like to be join OTA’s safari in Kenya which includes attending the event, please contact us on tracey@ota-responsibletravel.com and we will add you to the list and let you know as more information becomes available.

A philanthropic tour operator, creating positive experiences both for travellers and the local communities we interact with. We provide quality tailor-made tours that visit the sight-seeing highlights as well as community-based organisations.
View all posts by overlandtraveladventures »
← Introduction to Magnificent Birding at Lake Naivasha
Tools You Need for Planning a Holiday →