In December 2012 Francis wanted to show me Lake Magadi as a place to bring our guests on day trips.  Nearby, Nguruman is one end of a hiking trail through Loita Hills, whose other end is close to the Maasai Mara, and we also wanted to research that trek.  But the main destination was Magadi’s hot springs!  I was so excited, having visions of natural hot springs akin to Mataranka in the Northern Territory, Australia (i.e. lots of trees surrounding a beautiful natural bath).

How wrong a person can be!  Nairobi is cool due to the altitude and one could not imagine the change in climate that is possible in just 80 kilometres.  But Lake Magadi sits at the bottom of the Great Rift Valley and the weather gets progressively hotter as you descend.  By the time you reach the hot springs, all you can think of is sliding into the pristine water.  You soon remember however, as you dip your toes in, that these are hot springs… and they are really hot (up to 86ºC at the source, but around 45ºC in most areas)!

The big shady trees of my visions, which may have made the hot springs a viable option for a swim, of course were not around.  Magadi is a sodium carbonate alkaline lake and most of its area is covered by water for only a short period each year, during the rainy season.  For most of the year, the lake is a vast salt pan, with small pools around the springs.

On the way to the lake is Magadi town, which I thought reminiscent of mining towns in outback Australia, and indeed it essentially is.  Lake Magadi is the world’s second-largest source of sodium carbonate and the Magadi Soda Factory lies on the northern end of the town, producing soda ash for various industrial uses.  Had I paid attention to that, I probably would have been less hopeful of big trees!

Francis and I returned this New Years Eve.  On our visit in 2012, we decided that day trips to the hot springs may not be so fun, but an overnight camping trip might be better to enjoy a bath under the stars.  The local Maasai bathe during the heat of the day, which I had to admire – I could not even keep my toes in for more than a minute!  It’s still hot but bearable after the heat of the sun has disappeared and our midnight dip was a sublime beginning to 2014.

But the main reason we like Lake Magadi is the surprising range of birdlife found in the area.  The lake is well-known for its flamingos who feed on the algae, mainly in the southern parts of the lake.  In the northern part of the lake are some fresh water springs where other species can be found.  As we drove through the area we were treated to Blacksmith Plovers, Ostriches, a Kori Bustard, Lesser Flamingos and a huge variety of smaller species flitting about (the area is not a complete desert and there are some trees and shrubs for the birds).  Mammals also inhabit the area and we saw wildebeest, zebra, giraffe and gerenuks. 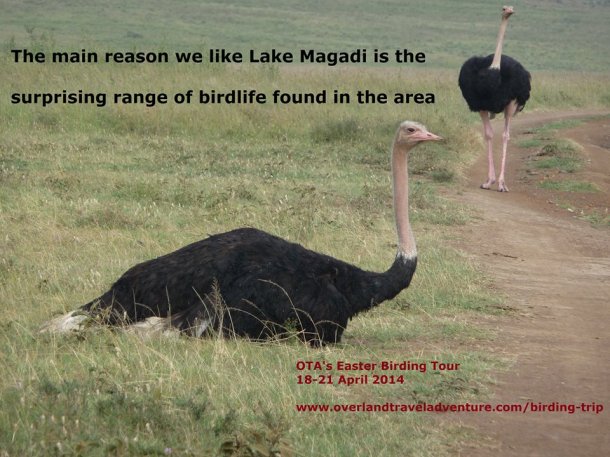 This Easter we will return and this time we want to invite you.  Between March and June, Kenya’s southern lakes (including Natron and Magadi) are breeding havens for water birds and migrants, so April is the perfect time to experience this area.  Departing Nairobi on April 18 and returning on April 21 the trip will take us on a hike through the Ngong Hills, discover Kenya’s ancient history at Olorgesailie, explore the forests around Nguruman Escarpment, witness the extraordinary birdlife of Lake Natron, and finally a late night dip in Lake Magadi’s hot springs.  Visit the website for more information and register your interest or Like us on Facebook and find the Event page for the full itinerary. 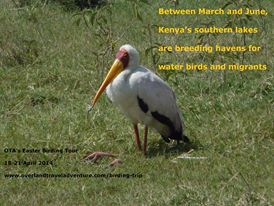