On 1st June each year, Kenya celebrates Madaraka Day, a day which commemorates the beginning of Kenya’s self-governance.  “Madaraka” is a Kiswahili word meaning “responsibility” and 1st June signifies the day the British colonial rulers handed over the responsibility for governing Kenya to the Kenyan people.

Throughout most of the 1950s, the Mau Maus had been fighting in Kenya’s central highlands against British rule.  Tens of thousands of Kenyans had died during the struggle with the British suffering relatively low losses.  However, the rebellions led to increased political involvement being granted to Kenyans and eventually, on 1 June 1963, the British handed over the reins to the Kenyan African National Union (KANU) and its leader, Jomo Kenyatta, became Kenya’s first Prime Minister.

Although Kenya now had internal self-rule, it was not yet fully independent from the colonial power.  So Madaraka Day is not the same as Kenya’s Independence Day – that is celebrated in December.  Independence came six months after Madaraka on 12 December 1963.  Another year later Kenya became a Republic and Kenyatta’s title was elevated to President of the Republic of Kenya.

Nowadays, Madaraka Day is one of Kenya’s big celebrations.  The main event is the President’s address at Nyayo Stadium along with singers and dancers from all over the country performing traditional songs.

In 2013, Kenya celebrated its Jubilee – 50 years of independence.  There were mixed reactions from the population about Kenya’s progress over the past 50 years and as a foreigner living in Kenya, it was very interesting to hear the comments.  Some people said that with the high levels of corruption in the government, Kenya has not progressed at all since independence, while others were positive about Kenya’s development and simply enjoying the fact that they had been free from the colonial power for 50 years.

Madaraka Day is a public holiday in Kenya and usually marked by a long weekend that gives Kenyans a chance to travel.  It is at the tail-end of the rainy season as well, giving Kenyans all the more reason to get out of town and enjoy a holiday.  Rhino Charge, an incredible 4×4 rally in isolated bushland, is held on Madaraka Day weekend each year.  Even for non-competitors it is a fun event: camping out, watching some amazing driving feats, and enjoying the party each night.  In 2015, the Lake Turkana Cultural Festival was also held on the Madaraka Day weekend, but it is not yet confirmed whether it will remain on these dates next year. 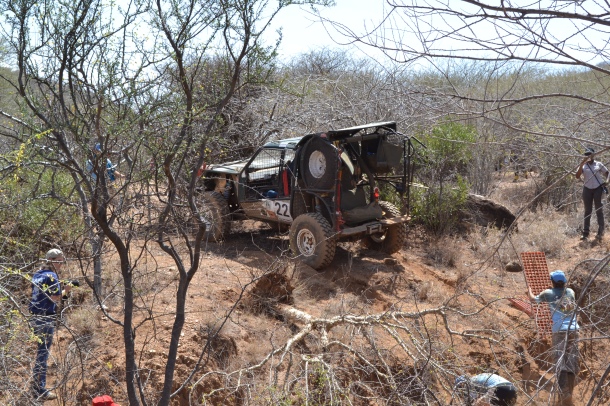 Rhino Charge, an incredible 4×4 rally in isolated bushland, is held on Madaraka Day weekend each year

Kenyans definitely know how to celebrate their public holidays so as you are planning your safari, have a look at the calendar and try planning it around one of these events.  Or you can contact us (tracey@ota-responsibletravel.com) and we can give you some ideas of holidays and festivals you might enjoy in Kenya throughout the year.

When Is the Best Season to Travel in Kenya?

People often ask us about the best time of year to come to Kenya, so we decided to put together this guide to help you plan your own safari.  There are pros and cons for every time of year, so it largely depends on what you want to see and how you prefer to travel.

The high season in Kenya is the dry season which runs from July to September.  The grasses are low so you can get better animal sightings and you can access more places when it is not raining.  The biggest highlight at this time of the year is the Great Wildebeest Migration when massive herds cross the river from Serengeti in Tanzania to the Maasai Mara in Kenya around July.  This is Kenya’s most popular attraction and, as it conveniently coincides with summer holidays in North America and Europe, it is the busiest time of year.  This results in higher accommodation prices and of course many more tourists. 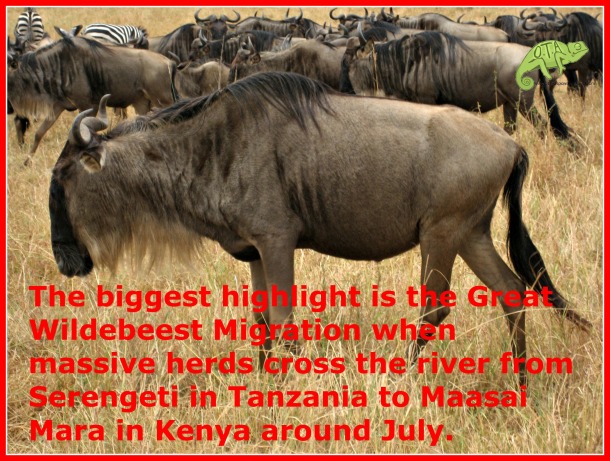 Conversely, the low season is also the wet season, beginning in March and finishing around June.  The main reasons to visit at this time of year are the reasons you wouldn’t want to go in high season – lower prices and fewer people.  During this period, you might even find a lodge safari at the same price as a high season camping safari.  However, the rains mean the grass grows quickly and thickly making animals harder to spot.

That leaves the shoulder season between October and December.  This is a nice period to visit as the wildebeest herds are still in the Maasai Mara, although they start to leave in November or December.  Some lodges drop their prices somewhat between the high season and Christmas.  However this season is also defined by the “short rains” (it rains for a short period of the day, as opposed to the long rains in March to June where it rains for a long period of the day) and if you end up staying at accommodation that retains a high rate right through to Christmas then putting up with a bit of rain may not be worth it.

Finally the Christmas period from December to February is marked by hot and dry weather and a high concentration of wildlife in the major parks.  The best feature of this season is the migratory birds arriving in Kenya in their millions.  On the other hand, the mass migratory herds have usually moved back to Tanzania by this time.  Christmas and New Year supplements are often charged on accommodation.

So given all that, what’s the verdict?  If pushed to make a recommendation, we suggest September to November.  The rains are not so bad, you can find accommodation that has reduced prices, the migratory herds are still in the Maasai Mara (usually until around November), there are not so many tourists because the summer holidays are over, and the migratory birds start to arrive in November. 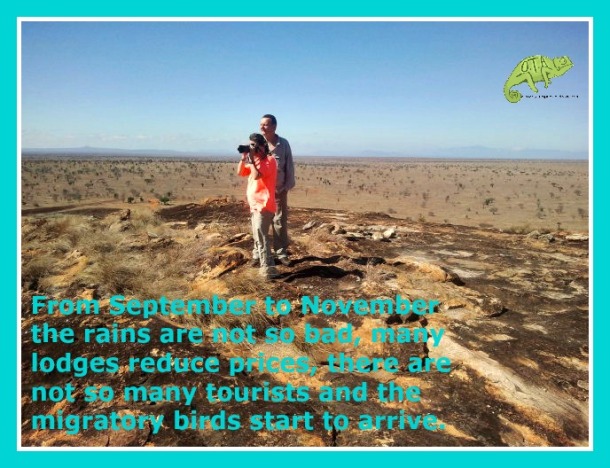 Looking Back: Tourism in Kenya

“Mzungu!”  This oft-heard cry directed at travellers comes from colonial times when the British were travelling from Mombasa port to Nairobi and back.  To the Kenyans at the time, all the British looked the same and so they thought it was the same person going around in circles. Mzungu means something that rotates!  Tourism in Kenya has come a long way since then and this article will look at its development from early traders to the growing industry of today.

Around 800AD, Arab traders arrived under the command of the Sultan of Zanzibar. Mostly slave traders, these visitors were not the most welcome in Kenya’s history.  The Portuguese took control of the coastal area in the 16th and 17th centuries, but the Arabs soon took it back.

In 1895, Kenya became a British protectorate.  Tourism began with the colonial settlers in the early 1900s.  The settlers enjoyed going “on safari” to hunt The Big Five (lion, leopard, elephant, rhino and buffalo).  Luxury camping with numerous servants was the standard, and they either travelled by motor car or on horseback.  The movie Out of Africa has some excellent scenes of a typical safari during this time.

Independence
In the 1960s and 70s tourism throughout the continent was hit by independence struggles, but the hunting safari remained popular.

Shortly after independence, the Kenyan government realised the tourism potential of the country and the impact on the nation’s economy if the industry were to be developed.  The main obstacle however was the lack of qualified people.  So the government, together with the Swiss Confederation, established a training program which produced the first Hotel Management students at Kenya Polytechnic in 1969.  In 1975, the Kenya Utalii College was founded as a dedicated hospitality and tourism training institute.

Also in 1975, the Africa Travel Association (ATA) was established to assist the new African nations develop their tourism infrastructure.  In 1980, the Association for the Promotion of Tourism to Africa (APTA) was born out of the ATA.  It seems to have much the same objectives, namely to promote education of tourism to African business and to promote Africa as a destination to the rest of the world.

In the wake of the 2007 elections, inter-tribal violence caused upheaval in Kenya.  Although none of the violence was directed towards foreigners (it was tribes fighting to have their man in the presidency) it impacted the industry significantly.  Tourism slumped by about 50%.

Despite the violence early in the year, April 2008 saw Kenya win the Best Leisure Destination award at the World Travel Fair in Shanghai.  In 2010 Kenya received over one million arrivals, a record number to that time.

Last year, both President Uhuru Kenyatta and Vice-President William Ruto pledged their commitment to growing Kenya’s tourism industry during their inauguration speeches.  Currently Kenya is receiving approximately 1.5 million tourists a year.  But Ruto stated that this government is committed to growing that number to 3-5 million in order to turn around the economy and increase jobs for young people.

At the 2013 World Travel Awards (Africa), Kenya was well-represented among the winners.  The Kenya Tourist Board won Africa’s leading tourist board award.  Nine accommodation categories were taken by Kenyan lodgings in categories such as eco, green, meetings and conferences, spa, and tented safari camp.  The Maasai Mara was named Africa’s leading national park.

Kenyan tourism is growing from strength to strength.  Long gone are the hunting safaris; now the only shots taken are with a camera.  Despite the terror attack and airport fire last year, Kenya has been recognised globally as a leading destination.  Security remains an issue for many travellers coming to Kenya but, with the government’s renewed commitment to developing the industry, it is a safe place to holiday.  And as the general population recognises and profits from the economic benefits of tourism, the support of the nation will only increase Kenya’s attractiveness as a destination.